I could go on all day about how awesome I think the Logitech G930 Wireless Gaming Headset with 7.1 Surround Sound is.

But for the benefit of you having to cypher through all the mumble-jumble, I have narrowed this review down to the most important things you should consider when buying any gaming headset, whether it be this G9300 by Logitech or any gaming headset.

I recommended this wireless headset to a friend of mine about a year ago and he is still a very happy customer.

I did plenty of research into this superb headset so I knew I was providing my friend with simply the best gaming headset for around $100-$130.

Naturally, your gaming situation will be different from the next gamers, so take it upon yourself to decide whether this is the headset for you.

We will discuss the wireless capabilities and whether the wireless range lives up to Logitech’s quoted wireless distance. The battery life of the Logitech G930 headset. Can it handle good gaming work out?

Some simple tips to make using the Logitech wireless gaming headset a little bit easier and why I think this headset destroys all others in its path to obtain the Best Wireless Gaming Headset status.

Don’t be tied down anymore. Break free from the world of tangled cords and join the wireless revolution.

What makes this Logitech model one of the best PC Wireless Gaming Headsets on the market? The answer is simple to me: It’s awesome wireless capabilities. Logitech claims that this headset can be interference-free for up to 40 feet. Impressive yes.

But does it actually stand up to the Logitech claims?

According to pcmag.com the G930 does actually stay wireless at the 40 feet mark without losing connection. When compared to a much more expensive headset: The Creative Sound Blaster Tactic 3D Omega. This Logitech G930 gaming headset smashes the Omega headset for wireless range by 10 feet. Not bad for a headset that’s $50 less.

Can You Charge The Logitech G930 Whilst Playing Games?

What’s the point of buying a wireless gaming headset if you cant stay wireless for the whole gaming sessions right.

Well with the G930, I don’t think battery life will be a major concern. Reports of other gamers online have said they get anywhere between 8 – 16 hours of gameplay before needing to charge the headset.

If you can get a full workday out of your wireless headset before needing to recharge the batteries then your onto a winner in my opinion.

If you do come across the situation of a flat battery in your headset, you need not worry because yes you can charge the G930 while you are using the headset.

Simply connect the Logitech headset into the USB recharging base via the USB cord and your good to go.

So essentially you’re getting the best of both worlds with this headset. Corded and wireless.

The headset itself is considerably light for a full-sized gaming headset. As for its ‘style appeal’, some people think it looks rather an old school and somewhat bland. While saying this, these people are not giving the headset a negative rap because like me they know its the overall package that counts. Not the looks.
The physical features of the Logitech Wireless Gaming Headset G930 with 7.1 Surround Sound include:

Economical design for maximum comfort on your ears and head. The foam padding under the headband relieves pressure on your head. 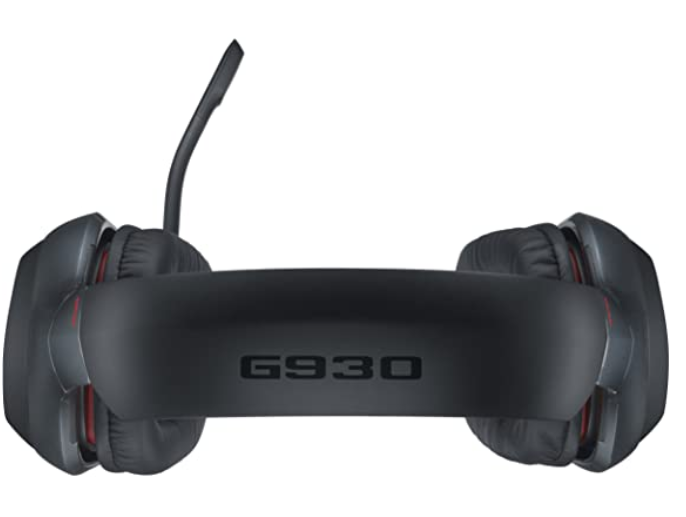 Initially, the headset felt rather good on my head, after a few hours of testing its comfort, nothing had changed and I was very impressed with the overall comfort of this headset.

The actual structure of the headset is considerably sturdy and durable. Although it may appear that the ear cups are made out of plastic, this is merely a cover for what’s inside. The actual joint (moving part) is made from aircraft-grade aluminium alloy.

The microphone works extremely well and whats it really great is that it can bend to your preference of location. If you move the mic all the way back to the earpiece it automatically mutes. I have no complaints from others when using this mic. Not only in gameplay but also on Skype and Android Google phone, the reception was all class. The mic is noise-cancelling and eliminates background noise rather well.

The controls are very conveniently placed. They are located on the left ear cup and feature 3 programmable G- keys. Allowing you to program your headset for quick settings, Such as voice distortion, open iTunes, change user (if multiple users are using the headset, quickly change between user settings) etc.

You don’t just hear every footstep, gun reload and even bullet shells hitting the deck, you’re able to pinpoint the location from where to noise came. The surround sound is that life like it is unbelievable. If for some reason you don’t like surround sound you can simply turn it off with the press of one button. Modify the sound to your liking with the 10 band Equalizer which is located just under the bass treble controls.

While no gaming headset is perfect, it is also important to know some of the factors that have consumers worried about buying this set and whether there is any solution to the problem.

For a company like Logitech, they will want to maintain a good reputation, so it is vital that they as a business cater to consumers needs, even if they are complaints.

So let’s have a look at a few of the issues surrounding this Logitech Headset.

Solution: The easiest solution to reduce and even stop interference is to avoid placing the wireless dongle anywhere near 2.4ghz devices as they cause interference.

Disconnecting/cutting out: These potential solutions may help your situation: Make sure the headset is fully charged, Never plug the USB dongle into an unsupported setup (the USB dongle has to be directly connected to your PC), switch USB ports that the dongle is plugged into and finally check for wireless interference from other devices such as monitors, keyboards, phones, speakers etc.

The durability of the headset: Of course every headset does have a breaking point. But these are well-built headsets and can only take what they can take. Good news is that if you do leave them lying around, you won’t roll over any cords with your chair and the USB dongle can be replaced (under warranty) if you do manage to break it.

Yes, the Logitech G930 is compatible with Windows 10. First, you must get the latest software update once you install.

I give the Logitech G930 with 7.1 Surround Sound a whopping 4 1/2 headsets out of 5. The reason it doesn’t get 5 out of 5 is simply because of its compatibility. If I was only a PC gamer then it would easily be a 5 out of 5 headsets.

But as I’m also a console gamer its really unfortunate that this gaming headset is limited to just windows.

Other then compatibility I am completely obsessed with the Logitech Wireless Gaming Headset G930. The overall package is high quality and the price tag is well priced for what you get.

Things you should know about SoulSilver and how to download it?

Proposed ‘Virtual’ Concepts Becoming a ‘Reality’ in No Time

What are the different kinds of error logs?

What is a Proxy Server?